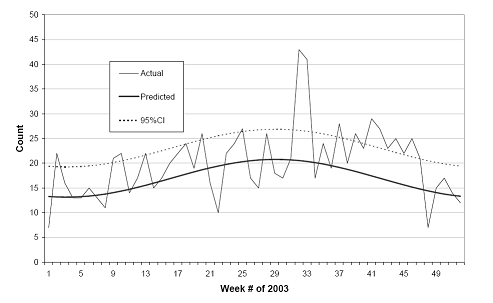 SYNOPSIS
While the majority of potential bioweapons and emerging infectious diseases are associated with disease-causing agents that are zoonotic, detection of a zoonotic disease outbreak continues to rely on the identification of human cases. Existing disease surveillance in animals is inadequate to detect outbreaks of zoonoses early. Development of outbreak surveillance that is integrated across multiple species is warranted to improve our capabilities of detecting outbreaks earlier and providing the opportunity for implementation of earlier interventions that reduce morbidity, mortality, and economic burden. The author describes investigations they have completed into the using data from a veterinary diagnostic laboratory for the early detection of outbreaks caused by zoonotic pathogens. Results demonstrate the occurrence of increased incidence of disease affecting humans and animals at the same time and indicate the possibility of significantly earlier warning of these and like events.

ONE MEDICINE
We know that about 61% of all known infectious pathogens are zoonotic (capable of infecting humans and one or more species of lesser animal). We also know that humans serve as the primary reservoir for only 3% of known zoonotic pathogens.1 Yet our capability for detecting outbreaks of disease caused by these zoonotic pathogens often relies on our identification of human cases.2,3 Existing disease surveillance in animals, mostly involving agricultural species, tends to be very disease-specific. Therefore limiting the ability to detect diseases other than those for which they are designed.4 Diseases of interest to the regulatory agencies that manage these systems do not always match the interests of human health practitioners and public health authorities. Typically, the diseases selected for surveillance in animals are those that are the highest risk of causing economic disruption to the marketplace, not those that present the greatest risk of infecting humans.5,6 In 1964, the late Dr. Calvin Schwabe shared his vision of veterinary and human medicine working together to address disease and improve upon public health. Schwabe coined the term “One Medicine” to describe his vision.7 Effective surveillance of zoonotic pathogens and control of the diseases they may cause requires integration across human and animal populations.8-10 Such an approach is lacking in contemporary veterinary and medical communities. A 2000 report from the Chemical and Biological Arms Control Institute notes the absence of strong links between public health and the veterinary community, referring to it as an “important disconnect”.11 The earlier that a zoonotic disease is detected can also mean the earlier that actions, such as post exposure prophylaxis or quarantine, can be taken to reduce the threat or impact to humans.12-14 Enhanced disease surveillance in animals as part of a one medicine approach could lead to a quicker and more oordinated response by both veterinary and public health authorities; a response that would greatly minimize the impact from an outbreak of zoonotic disease by identifying it in its earlier stages and taking efforts to eliminate the pathogen from all affected populations.

PETS AS SENTINEL INDICATORS
Pet animals share much of the same environment as their owners15 and have been used as sentinel indicators for diseases associated with exposures to pesticides and asbestos.16 When infected at the same time, animals will develop signs of some disease before humans17,18 and therefore might fill a role as sentinels for the earlier detection of outbreaks of infectious disease, including those resulting from the purposeful release of a disease-causing agent.19 Pet animals might also become infected first and be a possible source of infection for their owners and others.13,20 Children are at higher risk of being infected from animals because of certain behaviors such as nail biting and thumb sucking.21 Identifying either scenario might provide an alert that could summon the attention of health officials and provide for earlier identification of an outbreak, whether occurring naturally or intentionally, and potentially the disease-causing pathogen. The disease surveillance programs that are in place for agricultural animals do not exist for pets. No regulatory agency is charged with the collection of disease reports in pets, so it can become confusing for veterinarians treating these animals in deciding what needs to be reported and to whom.22 The origin of diseases resulting from contact with animals may not be as obvious to health providers and public health officials as bites and scratches.23 Outbreaks of some diseases may spread for some time, unrecognized as originating from or involving animals.24 In the absence of disease reports for pets, public health officials are challenged to find any data about co-morbidity in animals that could aid them in identifying and controlling outbreaks of zoonoses.

SYNDROMIC SURVEILLANCE
Syndromic surveillance is the systematic and ongoing collection, analysis, and interpretation of data that precede diagnosis and can signal a sufficient probability of an outbreak to warrant public health investigation.25 The application of syndromic surveillance methods has been recommended to detect novel and emerging zoonoses including those associated with potential bioterrorist action.26 Selection of data sources for syndromic surveillance is initially influenced by evidence or the belief of the system developers that the source can provide an early signal for the disease of interest.27 The most valuable data sources for syndromic surveillance are those that are stored electronically, permit robust syndromic grouping, and are available in a timely fashion.28 Systems that require additional data entry and increase workloads are undesirable, especially for large-scale, sustained surveillance.29-31 Using existing data that have already been collected for other purposes, are stored electronically, and can be transferred automatically are preferable as they do not depend on changes in workflow.32,33

VETERINARY DIAGNOSTIC LABORATORIES
For many outbreaks, detection may require central aggregation and analysis of data from many sources.34 Commercial laboratories offer the advantage of providing data for patients seen by many different providers over a sizeable geographic area from a single source.35 This is no less true for commercial veterinary laboratories where the majority of approximately 22,500 private veterinary practices in the United States submit patient samples for analysis.15 IDEXX Laboratories, Inc. (Westbrook, Maine) receives over 11,500 specimens, on average, from veterinary clients across the United States each day (Robert Ledford, personal communication, 2007). As these specimens are received, laboratory personnel create an electronic record that includes data useful for outbreak surveillance (e.g. ZIP code of clinic, species of animal, date of specimen collection). We completed a retrospective study of microbiology test orders submitted to IDEXX for specimens originating from veterinary clinics in Central Ohio during 2003.36 Specimens were predominantly from pet species (59.0% dogs and 21.6% cats). Serfling regression methods were used with historic data to develop models of expected counts of genera-specific pathogens for each week such as hemolytic Escheria coli (Fig. 1). Periods where the observed weekly counts exceeded the upper 95% CI threshold for two or more consecutive weeks (e.g. weeks 32-33 and weeks 40-47) were considered a cluster. Comparison of these pathogen clusters in animals with the incidence of disease reports in humans from the same area sometimes revealed significant increases in the same genera of pathogen infecting humans and animal species at the same time (Fig. 2). Only 10 of the total E. coli (O157:H7) cases in humans with onset of illness reported between weeks 40 and 42 were attributed to contaminated food. Eight of the total cases in humans involved pathogen species that were indistinguishable by pulsedfield gel electrophoresis (PFGE). Three of the cases were children. None was among those associated with food (L.S., unpublished data, 2006). There was no means to verify that any of the human cases reported had contact with any of the animals represented in the IDEXX data. However, the mere existence of increased incidence of E.coli in pet animals and humans in the same area at the same time is noteworthy.

PROSPECTIVE DETECTION OF INCREASED DISEASE INCIDENCE
The authors used a prospective study design to investigate using test order requests made to IDEXX from veterinarians in Ohio for early outbreak detection.37 Laboratory orders were mapped to syndromic category based on the disease/s each was used to diagnose. Electronic records of orders were automatically batched and transferred from IDEXX daily. Counts for each category were analyzed as records were received to detect unexpected increases. Alert periods, defined as 2 or more consecutive days where the observed counts exceeded the threshold, were investigated by interviewing veterinary practitioners located in the area of the alert. Of the 9 alert periods that occurred during the 90-day study, 2 were associated with verified increases of illness in animals. At least one of these was further associated with disease in humans. For that alert period, warning of the increased counts of laboratory orders occurred 21 days prior to notification of an outbreak to public health authorities through traditional reporting methods.

IMPLICATIONS FOR PUBLIC HEALTH PRACTICE
Following the introduction of Bacillus anthracis into the United States postal system in October 2001, there has been a heightened interest in developing disease surveillance that is capable of detecting outbreaks earlier than is generally possible through traditional reporting methods.38 Results from the retrospective investigation discussed here indicated that the true extent of outbreaks involving multiple species may go unrecognized by surveillance more commonly used by public health. Treating only humans in a multiple-species outbreak could leave a disease reservoir unchecked and provide for re-infection. Including pet animals in disease surveillance programs may also provide us with earlier recognition of an outbreak that has the potential of affecting humans. The prospective study described indicated that such a warning may be possible 21 days earlier than when the first human cases are reported. Surveillance is critical to effective disease management and the early detection of zoonotic disease outbreaks.39,40 While no single data source is capable of capturing all of the information required for early outbreak detection30 surveillance that includes data from both human and animal populations is critical to protect the health of both these populations.41 We have come to recognize that an outbreak of disease does not always confine itself within political boundaries. We must also consider that, in many instances, disease does not confine infection to a single animal species. We have become more adept at working across our political jurisdictions to control disease and must now bridge our species-defined disciplines to improve our disease surveillance capabilities; for the health of all.

Want to join the discussion?
Feel free to contribute!