All Emergency Department Registration data coming into EpiCenter is automatically classified by the system. Classifications are categories or tags associated with each healthcare interaction that are used by EpiCenter’s Syndromic Surveillance and other analyses. Classifiers are groupings of conceptually similar classifications.

Classifications for Acute Care Interactions are based on an individual data field. Most commonly this is the “chief complaint” field, but others such as diagnosis code can be considered as well. Health Monitoring also supports the definition of “composed classifiers”, which combine evidence across multiple classifications. This bulletin provides more detail about composed classifiers and how they work.

To use a simplified example, the “Suicidal Ideation” chief complaint evidence classification searches for chief complaints that include the word “suicide” but not the phrases “denies self-harm” or “accident.” 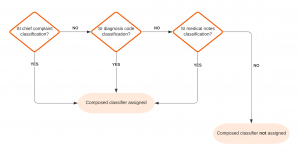 No changes are planned to existing system classifiers or classifications. Development of new composed classifiers can be supported as a customization.

Want to join the discussion?
Feel free to contribute!